Adopted at the 9th Congress of FRSO in spring 2022.

A revolution is needed to end capitalism. The monopoly capitalists and their political representatives will never peacefully relinquish power of their own volition—they must be overthrown. When people rebel against injustice, the ruling class resorts to repression. The American Revolution against British colonial rule involved force, as did the U.S. Civil War to end slavery. We will never gain anything more than what we are organized to take, ever!

By overturning monopoly capitalism, we open the road to freedom for working and oppressed people. A socialist future creates endless possibilities for humanity to work collectively to solve the great challenges of the economy, health, science, culture, war, and the environment. In a socialist world, we will have lives with purpose in a healthy, productive society that benefits all people.

The starting point of socialism is the multi-national working class taking political power into our own hands. We will use this power to remake the economy, the political system, and culture—bringing an end to exploitation.

Political power—our collective ability to dictate what is and what will be—lets us effectively attack every kind of injustice and inequality. We live in a society where goods and services are created by work in common, but the wealth created by that common work is appropriated by individuals. Socialism sets us on the road to the collective appropriation and use of what working people create. It is the beginning of a process leading to a classless society.

Socialism in the U.S.

The working class will occupy the commanding heights of the economy, taking control of the factories, utilities, transportation networks, big technology monopolies, mines, big retail stores, banks, and other major financial institutions. In short, the wealth—the means to produce and distribute the things we need and want—will be placed at the service of working people. Human needs—such as food, healthcare, housing, and education—will be produced and provided for the people, not for profit.

We will end the anarchy of production and replace it with a rational, planned economy, where working people come first. Capitalists strive to make the highest rate of profit, and this has nothing to do with meeting people’s needs. Capitalism is a wasteful system. We will do away with planned obsolescence, paying farmers not to farm, and most advertising. Instead of technology being a source of unemployment and insecurity, we will employ technology to free us from jobs that are dull or dangerous.

Work itself will be transformed. With the working class in charge of society, workers will have a real say in how our workplaces are run. Under capitalism, we face the despotism of foremen and supervisors who make us toil for exploiters. Socialism means we will have a real interest in the goods and services we produce.

Monopoly capitalism subjugates entire nations and nationalities within the borders of this country. A socialist U.S. will systematically address the economic and social inequality inherited from capitalism. Discrimination will be outlawed, as will reactionary, racist, and fascist organizations. In all spheres of social life, there will be a determined and protracted struggle against white chauvinism and ideas that promote or defend inequality.

Socialism will address the democratic demands that the rulers of capitalist America were unwilling to address—for example, the equality of languages and ensuring political equality. This means recognition of the right to self-determination for the African American nation in the Black Belt South, the Chicano nation in Southwest, and the Hawaiian nation, up to and including the right to separation. Socialism will support the demand for independence raised by the current U.S. colonies: Puerto Rico, the Virgin Islands, Guam, the Marshall Islands, the Northern Mariana Islands, and American Samoa. Socialism will also open the door to all-around national development for indigenous peoples, including restoring land, language, and culture stripped away by the American conquest.

The end of a capitalist society based on the drive for profit opens the door to a more harmonious relationship with nature. With socialism, we can seriously address the growing environmental catastrophe — including climate change. We can systematically raise our standard of living, while getting rid of all that is wasteful and irrational. Undoing the damage done to the environment by capitalism will be a vital goal of a planned socialist economy.

The oppression of women will be challenged and dismantled. While the inequality facing women is as old as class society—and in some cases predates it—for socialism to advance, the oppression of women needs to be pulled up by its roots. This means attacking inequality in the economic base, including inequality in pay. It means the realization of democratic rights, including reproductive rights, and developing ways for women to be able to participate fully in all aspects of political and social life, such as universal and readily available childcare.

Socialist society, in which political power is in the hands of the oppressed, will bring about the full liberation of the LGBTQ community—not only by fighting against regressive and bigoted ideas, but also by guaranteeing employment, housing, and full marital and familial rights. Violence directed against the LGBTQ community will be prosecuted and eliminated. Gender-affirming healthcare will be made freely available and accessible, as is already the case in socialist Cuba.

A new society needs a new culture that is positive, popular, working class in content, and that fits in with a country of many nationalities. The creation of the new will emerge as a struggle with the old. A socialist U.S. will promote science while combating ignorance. There will be a fight against white chauvinism, male chauvinism, and racist ideas. When necessary, narrow nationalism will be struggled with. A socialist culture, which includes everything from film and music to education and more, must promote socialist values such as cooperation while opposing the ugly, petty selfishness, and stupidity of capitalism.

A socialist U.S. will have a foreign policy that promotes peace and relates to other countries with the aim of achieving mutual respect and common benefit. The basis for this is working class internationalism—the principle that workers and oppressed people should unite for our common ends. We will aid other revolutionaries who are struggling against monopoly capitalism and oppression.

Socialism is working class political power, and that power is the hammer to remake society from top to bottom. First and foremost, it is needed to break the resistance of the capitalists and their supporters. Over the long run, power is needed to guarantee that society continues to advance and develop, and that the working class can meet those who might challenge it—at home or abroad. We will continue the class struggle until there are no more classes.

The capitalists and their spokespeople have always spun lies to attack socialism, claiming that it means dictatorship and bureaucracy. In reality, socialism is democratic; it is a higher form of democracy than the so-called democracy prevailing under capitalism. In place of the rule of a handful of billionaires and their bought-and-paid-for politicians, socialism is instead democracy for the vast majority. The dictatorship of the multi-national working class establishes for the first time full democratic rights for working and oppressed peoples, and acts as a bulwark against those who seek to drag society backwards.

Socialism is not a distant dream—it already exists in the People’s Republic of China, Cuba, the Democratic People’s Republic of Korea, Vietnam, and Laos. We are glad the socialist countries exist, and we stand with them. Socialist China has eliminated extreme poverty. Cuba has a medical system that is among the best in the world. Collectively, the socialist countries have done great things and their existence weakens the monopoly capitalists—our common enemy. We recognize that they are each the product of their own history and have their strong and weak points—it could not be otherwise. We will build a socialism that suits the needs of the U.S. people.

We have a positive evaluation of the achievements of socialism in the Soviet Union, Albania, and Eastern Europe. Reactionary regimes were overthrown, fascism was defeated, living standards were improved, and working people got power. But we also understand something went wrong. The leaders of many socialist countries gave up on Marxism, separated themselves from the people, succumbed to corruption, and fell prey to the efforts of imperialism. Abandoning their social base, the working class, they were swept away by, or joined up with counter revolution.

A communist party is a necessity

In order for there to be any revolutionary movement to overthrow capitalism, the multinational working class will need its own political party—a Communist party. This party serves as an organizing center for the advanced within the working class—those who understand the inevitability and necessity of class struggle, who act on this understanding, and who have revolution as their end goal. After revolution, in socialist society, the party will be needed to organize at the forefront of the efforts to meet everyone’s needs and eliminate all relations of inequality.

Marxism-Leninism is needed to guide our efforts to transform society and build socialism. Karl Marx, Friedrich Engels, V.I. Lenin, Joseph Stalin, and Mao Zedong are the principal theorists of this science of revolution. Marxism-Leninism has been enriched by the contributions of William Z. Foster, Mother Bloor, Harry Haywood, Claudia Jones, and many others. The history of the socialist, and then communist, movement in this country is a source of knowledge and inspiration. We learn from all of it. We do not think that just because someone said something, that makes it correct. Practice is the only criterion of truth.

While we can point to features and goals for a socialist society, we understand that a socialist U.S. will emerge from the revolutionary process that is distinct to this country. We are not proceeding from preconceived notions. Every socialist country is different. Socialism in the real world is the product of history and circumstances—the concrete conditions—and our efforts to transform those conditions.

The goal of socialism is a society without classes—communism. The working class is the only class in human history that has a core interest in abolishing itself as a class, and in doing so, all oppression.

A classless society is a long-term project, and to get there we need to keep our eyes on the prize. Socialism is about ending scarcity and replacing it with plenty, about moving to a society where distribution is truly according to need.

When people change the world, they themselves are also changed. To change the world positively, then, in pursuit of justice for the majority of humankind, is to change humankind itself. Only through the struggle for socialism can this bright future be ours. The present is the battlefield where control over the future is fought for and won. There’s no better time to join that fight than right now. 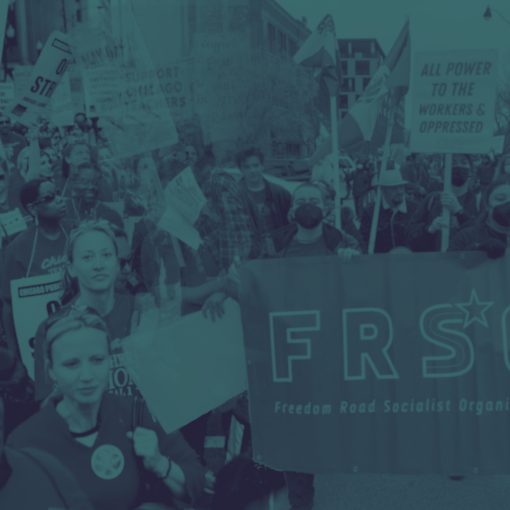 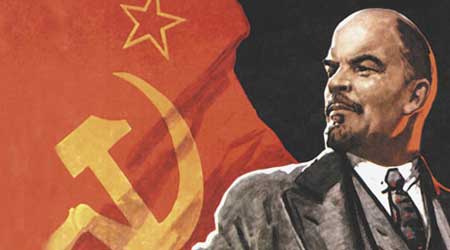 Español | PDF version By Freedom Road Socialist Organization In 2006 there was a huge upsurge in the Immigrant Rights movement, peaking on May […] 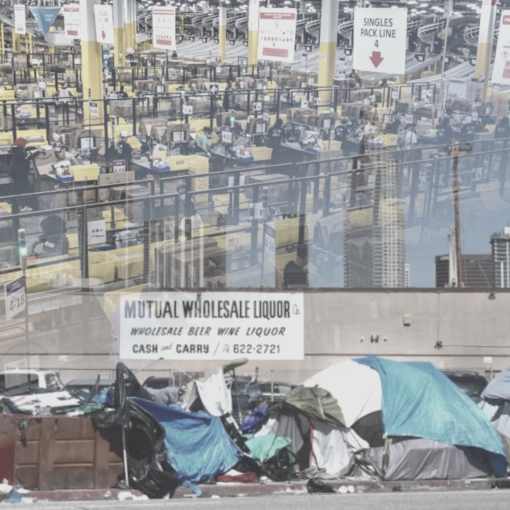