Recently the media has been abuzz with talk of the possible ‘nationalization’ of ailing big banks such as Citigroup. Both Democrat and Republican senators, as well as the former chair of the Federal Reserve, Alan Greenspan, have raised the possibility of a temporary ‘nationalization’ or government takeover of big banks.

Freedom Road Socialist Organization (FRSO) opposes ‘nationalization’ of banks by the present government. We stand with the majority of the American people who oppose more bank bailouts.

Let’s start with the government takeover of American International Group (AIG), one of the world’s largest insurance companies, last September. It began with an $80 billion bailout and takeover by the government. Then there was a second bailout, then a third, and now a fourth, adding up to more than $150 billion, with no end in sight. Even worse than the ever-rising cost is the fact that the government was not bailing out those who had bought insurance from AIG. The insurance part of AIG was regulated and there are enough assets to pay claims. The government is bailing out the wealthy investors and big banks that made loans to AIG, which were used to make big financial bets, known as derivatives. At least $50 billion of the AIG bailout has gone to big banks to pay off these bets. Why should the government spend money to bail out big gamblers when these are the very same people who helped to cause today’s crisis that has thrown millions of people out of their jobs?

This is what the bank bailouts are about: Not helping working people or small businesses, but saving the big investors and bankers. Look at the Troubled Asset Relief Program or TARP. The $300 billion spent on TARP has not gone to banks, it has gone to the holding companies that own the banks. And what have they used the TARP money for? To buy other banks, to pay billions of dollars in bonuses to executives and traders and billions more in dividends to stockowners. ‘Nationalization’ of the banks will be just another bailout of the bankers.

And where will the billions more in government aid that AIG and other big banks will be asking for come from? Not the rest of the world, which has been lending the U.S. government enough to cover almost all of the federal budget deficit and is also being dragged down by the economic crisis. These countries are trying to spend on their own economies; they are not out to save the United States. Trying to borrow the money in the United States would mean even higher interest rates, which would hurt the economy. The U.S. government may be forced to print the money, which could lead to more inflation and lower the purchasing power of workers’ wages. Or the federal government could try to cut spending on Social Security, Medicare or other social programs.

FRSO is a socialist organization. We believe that government ownership of the big banks and big corporations could help to create an economy that is based on peoples’ needs, not private profit. But this would require a government for and of working people. Today’s government is a far cry from that. Most politicians at the federal level are bought by Wall Street and big business and cater to their needs. The revolving door between the federal government and big business guarantees ‘good’ (that is pro-business) behavior by politicians, government administrators and top military brass. What we need is not bank ‘nationalization’ but a stronger and more militant people’s movement that can make the rich pay and protect the interests of poor and working people. 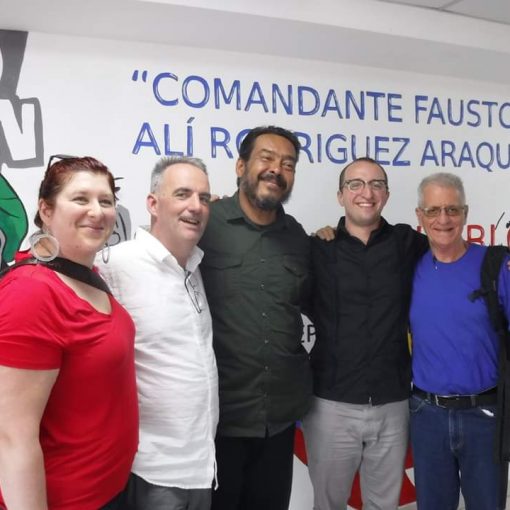 Caracas, Venezuela – The delegation from Freedom Road Socialist Organization (FRSO) met with Jacobo Torres, May 6, the international relations coordinator for […]