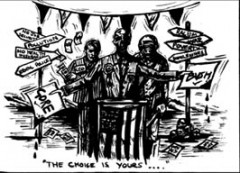 “The choice is yours” (Fight Back! News)

There are large protests being planned this summer, and we can make a difference. First in Philadelphia, with the Republican Convention, and then in Los Angeles, with the Democrats, thousands of progressive activists will be there to express our anger at the bought-and-paid-for politicians. These meetings will be key places to push a people’s agenda, and to make demands on the wealthy elite who control both political parties.

Just 32 years ago, people’s protest accomplished the unthinkable. Voting with our feet, in the streets of Chicago, demonstrators at the Democratic National Convention rejected the war in Vietnam, and blocked Lyndon Johnson from running for a second term as president of the United States.

Today, Democrat Al Gore and Republican George Bush offer absolutely nothing to working people in this country and or anywhere in the world.

Gore is the successor to President Clinton. He supported the attacks on welfare. He’s well-connected to corporate America’s drive for imperialist globalization. With his stock investments in the oil industry, he personally benefits from the exploitation of hard-working people. Gore spoke out against returning Elian Gonzales to his father in Cuba. Al Gore is not acceptable as president of this country or any other.

Texas Governor Republican George Bush is no better. He is an enemy of Affirmative Action. Texas is an anti-union, “right to work state”, and Bush is proud of it. Under his administration, use of the death penalty has become commonplace. This “compassionate conservative” mocked a woman appealing her death sentence: “Pleassse don’t kill me,”he told his friends. He doesn’t deserve public office, he deserves a public trial.

As bad as they are for people in this country, either one of these two will be terrible for the world’s peoples. Both of them back the bombing of Iraq, and both will try to escalate the war in Colombia.

There are two other candidates worth mentioning. The first is another enemy of poor and working people, Pat Buchanan. He speaks for the most reactionary, racist, and national chauvinist elements in this country.

The second is Ralph Nader.

Ralph Nader’s strengths are that he has championed consumer rights and civil liberties for many years. He opposed the anti-worker North American Free Trade Agreement. He fought corporate power in the health care industry, and in the election process. His voice as the only candidate supporting universal health care is head-and-shoulders above the other contenders. Yet, his limited support for the struggles of people of color in the United States, and his decision to join the new cold war against China, show a lack of political vision.

That being said, it is understandable that progressive activists, who want to support political action independent of the two-party system, would support Nader.

As a tool to talk about real political issues and organize large mass demonstrations, election year campaigns offer great opportunities. We can challenge the corporate agenda, and the candidates who back it. We must make our voices heard at Democratic and Republican Conventions!

By Freedom Road Socialist Organization A call was made by progressives in Colombia, including organizations of campesinos and trade unionists to stand […]

The Marxist-Leninists hold firm to their principles and organize the Memorial Day Meeting at the end of May, 1999, to continue the FRSO Congress Strategy. The FRSO confirms the road of revolution and rejects reformism. The meeting makes many decisions about how to continue with the important tasks of the FRSO given the new situation. The small group of hand wringers of the “Left” New Red Trend capitulate to the side of the splitters–uniting with the reformists.