The following is a May 2005 statement by the Minnesota / Madison District of Freedom Road Socialist Organization on the attempt by the University of Minnesota to shut down the General College.

The attack on General College is a racist attack on the oppressed nationality students who go to General College. It is also part of a plan to change the class character of the students at the U, getting rid of working class urban and rural students, and trying to attract more children of the rich. And the attack is part of a plan to orient the mission of the University toward fulfilling the research needs of large corporations rather than toward it’s Land Grant mission of educating Minnesota’s working class.

But General College does not only have oppressed nationality students – about half of GC students are white. What many of them have in common with the oppressed nationality students is class. The average income of GC students’ families is much lower than for other students at the U, which means that the students in GC are generally from a more working class background than the rest of the students at the U. Everyone knows that the school systems in working class and poor neighborhoods – urban and rural – don’t have the resources that schools in the wealthier suburban areas have. General College provides more support, and therefore more opportunity, for working class students.

Getting rid of General College, while at the same time creating a new Honors College – will have the immediate effect of cutting off support systems for working class students while showering new incentives and opportunities on students who are better prepared for college, which generally tend to be students who are from wealthier backgrounds. And for what? All so the U can make its numbers look better in ‘graduation rate’ statistics.

The leadership of the University of Minnesota is proposing what they call a bold, new plan to turn the U of M into one of the top 3 public research universities in the world. U of M President Bruininks released his “Strategic Positioning” plan, of which closing General College is one part. Bruininks’ plan would further entrench corporate interests at the U.

This comes in the context of year after year of harsh budget cuts to higher education from the Governor and State Legislature, particularly under former Gov. Ventura and current Gov. Pawlenty. When Ventura started cutting the U budget, then-U of M President Mark Yudof (who wasn’t so great either) at least made a fight out of it, going around the state and telling people that the budget cuts were wrong and people should mobilize to get more funding for public higher education.

But since President Bruininks took over, he has completely rolled over and not made a peep in the face of Gov. Pawlenty’s vicious attacks on public education and on the U’s budget. Instead, Bruininks has put forward this “Strategic Positioning plan” and proposed to close General College. Bruininks, a supposed “liberal” who spoke at the late Senator Paul Wellstone’s memorial service, has in short order become the front-man and mouthpiece for the neo-conservative, privatized, corporate vision of higher education championed by Pawlenty and the section of the ruling class that backs him.

The vision of the U contained in Bruininks’ plan is of a university that has given up on public funding and has put itself up for sale to the highest corporate bidders. The departments that get support are those that corporations pour money into in order to have their research performed in a publicly-built and funded institution. Departments and programs that corporations can’t immediately make big bucks on are slated for severe cuts or even outright closing – like General College and many departments in the College of Liberal Arts (which is the next College in the cross hairs if they succeed in closing General College).

The leaders of the U and their backers have a totally different vision for the U – they see the U of M as an elite college that very few Minnesotans should be able to go to, and that primarily focuses on corporate money-making research.

The movement to save General College is so important because if we can stop them from closing General College, we will have succeeded in putting a roadblock in the way of their grand scheme. And even if the U of M Board of Regents vote to close General College on June 10, the mass movement that emerged over the past few months has created the groundwork to continue the struggle and fight them every step of the way.

Education is a Right

Freedom Road Socialist Organization (FRSO) believes that education is a right, not a privilege. Under capitalism, money rules everything. But under socialism, the whole society is organized to meet the basic human needs of the masses of people – so that everyone has food, housing, jobs, and education. In socialist countries, such as Cuba, education is a right and is totally free, through the university level. As we can see from this struggle over General College and “Strategic Positioning”, under capitalism we have to constantly fight to even be able to get in to college, let alone afford the ever-increasing costs. This is why we are socialists, fighting for a better future where basic rights like education are accessible to all. 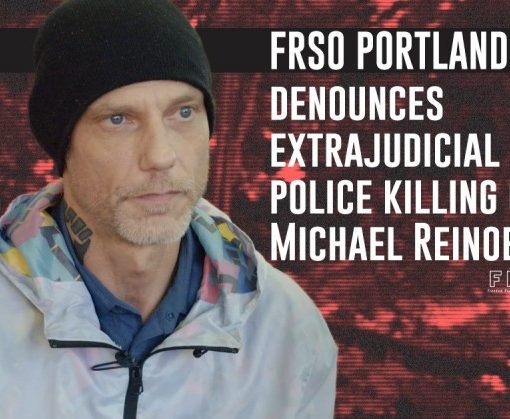 The Portland District of the Freedom Road Socialist Organization condemns the extrajudicial police killing of Michael Reinoehl. The system that cops uphold […]

By Freedom Road Socialist Organization Click here for PDF flyer of this statement As things stand, billionaire and bigot Donald Trump will […]