We condemn Israel’s murderous bombings and attacks in Gaza. Each and every Palestinian killed or wounded by Israel is an outrage to the peoples of the world. The Israeli state is punishing Palestinians and their leaders for demanding democracy and power in their own country. Israel is a colonial settler state ruled by war criminals. Israel exists on stolen land and borrowed time.

The aim of Israel is to kill the revolutionaries who lead the Palestinian people’s struggle in Gaza. The Israeli military is massing to invade with tanks and thousands of ground troops this coming week. Like the April 2002 invasion of Jenin in the West Bank, the situation is likely to become even grimmer. Israel seeks to wipe out the anti-Zionist, anti-imperialist, ‘serve the people’ groups that fight for freedom – Hamas, the Popular Front for the Liberation of Palestine, the Popular Resistance Committees, Islamic Jihad and others. The Israeli government is desperate to impose the rule of their puppets and stooges upon the people of Gaza.

While the peoples of the world understand that Israel is an attack dog for imperialism and the U.S. in particular, some of the Arab rulers actually help oppress the Palestinians. The reactionary regime of Egyptian President Hosni Mubarak is shooting at Palestinians who are trying to break through the border of Gaza into Egypt. While people starve and suffer, Mubarak accepts U.S. checks (and a U.S. bodyguard) for being Israel’s friend. The masses of Arab peoples, in solidarity with the Palestinians, seek to overthrow these traitors.

With President Bush’s blessing, Israel is bombing homes and universities, killing women, children and men, refusing hospital care to the wounded and blaming Palestinians for their oppression. It is outrageous! Still the Palestinians refuse to bow their heads. We stand with the Palestinian people. Their voices, and our voices, will not be silent. We are participating in and organizing protests around the U.S. We encourage all progressives to take immediate action, be it street demonstrations or occupying the offices of Congress people to demand an end to U.S. aid to Israel and an end to the attacks on Gaza.

U.S. Out of the Middle East! 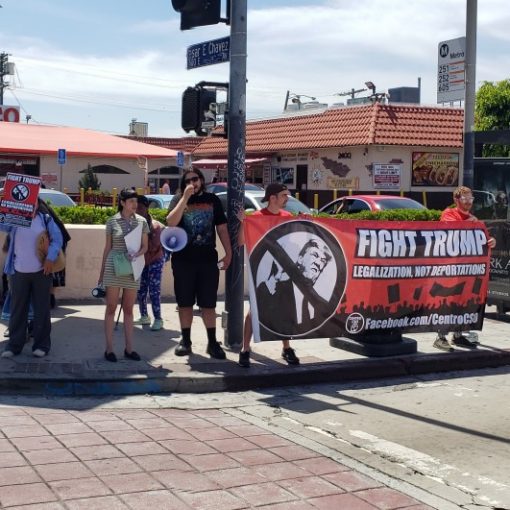 We in Freedom Road Socialist Organization salute the Colombian people's heroic struggle for national liberation and socialism. We oppose the U.S. government's […]