The Freedom Road Socialist Organization mourns the death of Colombian revolutionary Raúl Reyes. The attack that killed Raúl Reyes and 17 others while they slept at a camp inside Ecuador’s territory on March 1 was carried out by the Colombian military and directed by the U.S. government. It was an act of cold-blooded murder.

This act of aggression by the U.S. and Colombian governments trampled on the sovereignty of Ecuador and it may be the prelude to a regional war. Progressive and revolutionary people should denounce this act of cowardice.

Raúl Reyes was the voice of the Revolutionary Armed Forces of Colombia – People’s Army (FARC-EP). One of seven members of the FARC’s Secretariat, he will be sorely missed. A man whose manner reflected his caring and humanity, Raúl Reyes was the FARC’s chief negotiator in talks with the Colombia government during the presidency of Andres President Pastrana from 1999 to 2002. In this leadership role, Reyes became known worldwide as a diplomat and leader of the Colombian people. Born into a life of struggle, his father was a poor farmer and his mother a schoolteacher in rural Colombia. Raúl became a young communist and then a trade unionist, eventually joining the FARC to advance the people’s struggle.

Over the decades, the Colombian revolution grew and developed under the leadership of the FARC Secretariat, including Raúl Reyes. During a period of retreat for national liberation struggles and socialism around the world, the FARC marched forward. Like Raúl Reyes himself, the FARC set an example for and inspired others. By the 1990s, when many of the armed Latin American revolutionary movements were disbanded or destroyed, the FARC not only held their ground, but also advanced and won big battles. The FARC was doing what many imperialists, and even some leftists, thought impossible. They were winning. Today, the FARC continues to grow and expand, reaching into departments, towns and cities where they never existed before.

The FARC, embodying the lessons of four decades of struggle and guided by Marxism-Leninism, is a great representation of 21st century socialism. The FARC’s victories are the victories of the Colombian people, made possible because of women and men like Raúl Reyes. Raúl Reyes brought the peoples of Latin America closer to fulfilling the dream of Simon Bolivar – an independent, unified and peaceful future without U.S. domination.

The FARC leads the Colombian revolution against a corrupt and criminal class of rich elites who use death squad terror and repression to stay in power. Every reform movement in Colombia, whether leftist political parties, trade unions, or peasant collectives, is met with violence from the Colombian government; this has been the case for 50 years. The Colombian military is soaked up to its elbows in the blood of workers, peasants and progressive people. The murderous Colombian military officers train in Columbus, Georgia, where the U.S. military is the target of huge protests calling to shut the School Of the Americas. Bush is backing the narco-paramilitary government of President Alvaro Uribe, the most reactionary and criminal regime in the history of Colombia. President Bush is responsible for the death of Raúl Reyes.

The FARC is waging a courageous and heroic fight to liberate their country from U.S. imperialism and for the Colombian people’s control over their own land, labor and lives. We believe the FARC-EP stand firmly at the head of an unstoppable movement that will bring peace and justice to Colombia and Latin America.

We know that the loss of Raúl Reyes is great, but that the women and men of the FARC will continue to fight for the dream they shared with Reyes: a Colombia free from U.S. imperialism, led by the workers and peasants for the benefit of the people!

Freedom Road Socialist Organization salutes the living example of Raúl Reyes and the Revolutionary Armed Forces of Colombia! You can kill the revolutionary, but the revolution lives on in the hearts and minds of all who want to end oppression and exploitation. 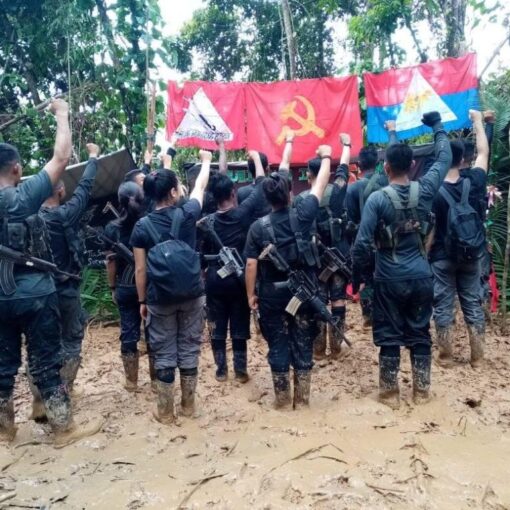