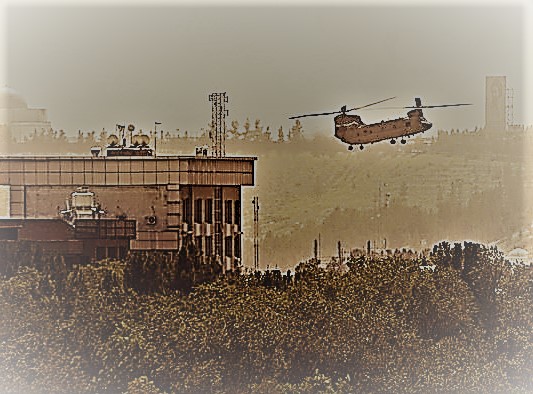 The images are searing. Helicopters ferrying diplomatic personnel from the U.S. Embassy while plumes of black smoke billow from the building. Taliban fighters with heavy artillery parade through the throughfares of provincial capitals. The International Airport, still under U.S. control, is in chaos as collaborators try storm planes to flee the country. In the space of a few weeks the puppet government collapsed, and its figureheads have vanished. The decades of occupation have come to an end. Those that fought to end it now sit at the former president’s desk.

The U.S.-led occupation of Afghanistan was never the right thing to do. The events of September 11, 2001 served as a pretext for the war on Afghanistan, a war that was cruel and unjust. Before the troops arrived, U.S. planes unleashed bombs on the country’s cities, destroying hospitals clearly marked with red crosses on the roofs. The invasion came with the brutality of a medieval crusade – marked by torture and summary executions. The U.S. and its accomplices always treated the Afghan people as the enemy. That is why we are seeing what we are seeing. The vast majority of the Afghan people welcome the expulsion of the foreign occupiers.

The occupation was never about helping people. It was about the domination of a strategic region of the world that is rich with resources. Nothing complicated about it. Empires doing what they always do – help themselves to land, labor and natural resources of others.

At the end of the day, and the end of the occupation, the Taliban are in fact a national liberation movement. A movement with real defects, largely lacking an agenda of social liberation that is product of a long historical process, which includes U.S. intervention to defeat the left in Afghanistan. That said, the people of Afghanistan have the right to determine their own destiny free of imperial arrogance.

The main way for assessing any movement for national liberation is by asking and answering the question, “does it weaken imperialism?” Undoubtably monopoly capitalism, or imperialism, was just handed a setback in Afghanistan. The rich and powerful who rule the U.S. rob people aboard and they rob us here at home. What is bad for them, is good for the rest of us. Their setbacks bring us closer to freedom.

President Biden heading out of Afghanistan is not a mistake – it is the recognition of reality. The U.S., along with the other Western powers, were defeated long ago, and we are witnessing the end of that process.

There is something fundamental going on here – U.S. imperialism is in a period of decline, and that decline is accelerating. In Latin America, Cuba and Venezuela are standing strong, and others are joining in. The Palestinian resistance is picking up steam, along with the other resistance movements across the Mideast. The revolutionary struggle in the Philippines is growing. Socialist China grows more powerful. The world is changing.

The outstanding Chinese revolutionary Mao Zedong remarked, “Now U.S. imperialism is quite powerful, but in reality, it isn’t. It is very weak politically because it is divorced from the masses of the people and is disliked by everybody and by the American people too. In appearance it is very powerful but in reality, it is nothing to be afraid of, it is a paper tiger.”

That is where we are at today. People everywhere, including here at home, are tired of the obnoxious elite that rules the U.S. The paper tiger, monopoly capitalism, can and will be defeated. It will take time, but time is on our side.

By Freedom Road Socialist Organization, March 2010 The March 4 national day of action for education was a huge success! Over 100,000 […]

Dear Comrades, It has been 50 glorious years since the Communist Party of the Philippines founded the New People’s Army, and Freedom […]