With incredible heroism, the spirit of sacrifice and a determination to win, the Egyptian people are taking to streets to end the rule of the hated President Hosni Mubarak. Police stations have been burned to the ground, as has the Cairo headquarters of Mubarak’s political party, the National Democratic Party. While we do not know what the coming hours or days will bring, a few things are clear enough. The people of Egypt have spoken. They are sick and tired of the old order and will fight to bring it to an end.

Every progressive person needs to know that the rebellion in Egypt is against more than poverty or the corruption of the Mubarak regime. U.S. support has been critical to keeping Mubarak in power for more than 30 years. Egypt is the number two recipient of American aid, right behind Israel. When you see tear gas choking people in the streets of Cairo, you can be sure that it was made in the United States.

The events in Egypt carry with them the potential to change the balance of forces in the Middle East, where most counties suffer under the yoke of corrupt dictators who are little more than Western puppets. The rulers of countries like Egypt, Yemen, Jordan, or for that matter, Saudi Arabia, do not represent the peoples of those countries. They take their orders from Washington D.C. and follow the U.S. pro-Israeli policies. These puppets represent the interests of U.S. and European based multi-national corporations that want to loot the resources of the region. These puppets are little more than pawns, that can be moved about or discarded in the ‘strategic interests’ of Western elites.

The national democratic movement in Tunisia, which ended the rule of the corrupt Ben Ali family, signified the coming of the storm. The powerful protests in Yemen and the real advances by the progressive forces in Lebanon, showed that something larger was at work. Now it’s Egypt’s turn. It can safely be said that in the Middle East, times are changing for the better.

Of course not everyone welcomes these events. Secretary of State Hillary Rodham Clinton had the nerve to lecture the Egyptian people on what methods were acceptable to use in their struggle for freedom. In Israel, every politician knows that the rising tide of struggle in the Arab countries portends poorly for the occupation of Palestine. In fact, collusion with the Zionists helps to undermine corrupt puppets of the West. The weakening and downfall of these regimes brings closer the day that every inch of Palestine is liberated.

Working and oppressed peoples here in the U.S. do not benefit from an empire of the dollar that extends into the Middle East and around the globe. The existence of this empire strengthens the hand of the rich and powerful who rule this country — foreclosing on our homes and throwing us out of work when they figure they can profit by it.

Every progressive here has reason to be excited by the developments in Egypt. The courage displayed by the Egyptian people commands our respect. We need to insist that all aid be cut off to the reactionary Mubarak regime and keep our eyes open for any Western attempts to put new puppets in power.

Great things are happening in the Middle East. Time is never on the side of an oppressor. The advances of revolutionary and democratic movements bring closer the hour of liberation.

Victory to the Egyptian people!

U.S. out of the Middle East! 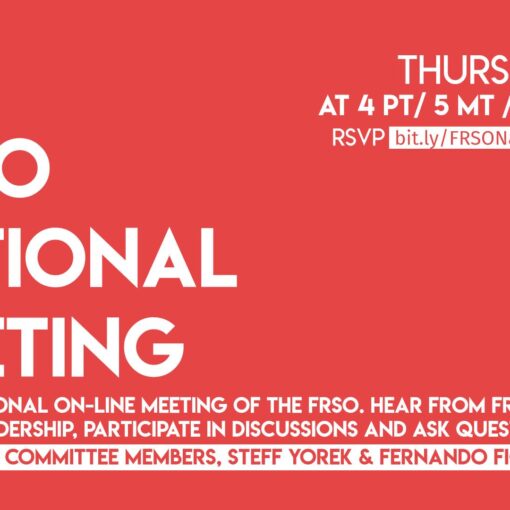 There has never been a better time to join and learn about revolutionary organization than now. On June 24 at 7 p.m. […]