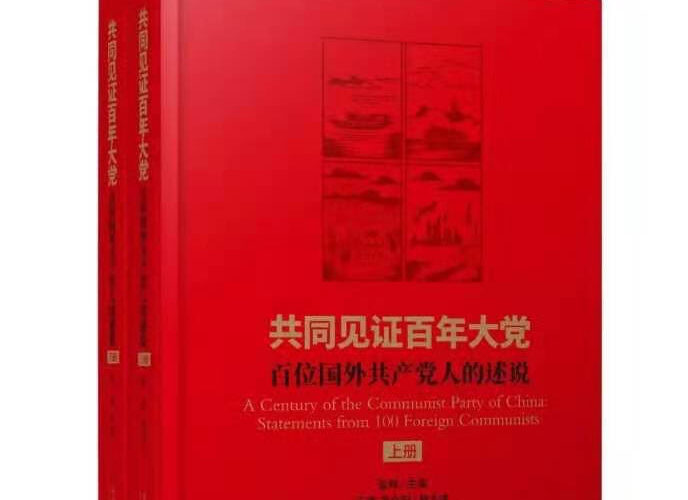 Mick Kelly is a member of the Standing Committee of the Central Committee of Freedom Road Socialist Organization and is responsible for the organization’s international relations. The following essay appeared in the book, A Century of the Communist Party of China, Statements from 100 Foreign Communists,published by the Contemporary China Publishing House.

This July 2021 marks a world historic occasion, the 100th anniversary of the founding of the Communist Party of China (CPC). It is an event of real significance for progressives, revolutionaries, and communists the world over, including those of us in the United States. China’s rich experience in defeating Western and Japanese imperialism, eliminating feudalism, and constructing a socialist society is of interest to all who hope for and are working for a bright future.

The Chinese people once had three immense mountains on their backs – imperialism, feudalism, and bureaucrat capitalism. The CPC lead the Chinese people in removing these burdens. Old China, beset by the plague of foreign imperialists, warlords, and the land-owning class of parasites, was a nightmare of starvation and subjugation. It was a society unable to save itself, and helpless in the face of adversity.

The British waged a war for the “right” to sell opium and claimed the city of Hong Kong as its own. The U.S. and other Western powers occupied Beijing in 1900, looting art, burning historic buildings, and mutilating the bodies of those they murdered – for the propose of obtaining an “open door” to exploit the land, labor and resources of the Chinese people. In Shanghai, the foreigners had their own park and they put up a sign, “No dogs or Chinese allowed.” Adding insult to injury they assumed the mantle of “standard bearers of civilization.” New China, the China led by the CPC and supported by other patriotic forces put to end to that.

Standing on the rostrum of Tiananmen Square in Beijing in 1949, the outstanding Marxist–Leninist, Mao Zedong proclaimed, “The Chinese have stood up,” and the much-needed work of building a modern, socialist country commenced.

Here in the U.S., the importance of the Chinese revolution and the positive example provided by socialism stands out in sharp relief. While the number of poor is growing in the United States, and the standard of living along with life expediency is declining, People’s China is eliminating poverty. Under the leadership of the CPC, China waged a people’s war on the COVID-19 pandemic and brought the crisis under control. Contrast that with the U.S., where a combination of criminal government mismanagement of the pandemic combined with a heath care system that exists only to obtain the highest rate of profit, has left more than half a million people dead. And every day that number grows.

Anyone who takes the perspective of the working class, and the broad masses of people as a whole, cannot help but to conclude that monopoly capitalism is a failed system that exists to serve the few at the expense of the many.

CPC is an organizer of successes and a problem solver

Critical to China’s many successes is the commitment to applying the living science of Marxism, or scientific socialism, to the realities of Chinese society. This includes maintaining the leading role of the CPC and adhering to the road of building socialism with characteristics that suit China’s needs. By any standard, the results have been spectacular. For example, the economy of the People’s China has grown every year since 1949. Socialism has proved its superiority time and time again. On the other hand, the economies of the West, including the U.S., are prone to periodic crises of overproduction, where industries are shut down, factories are shuttered, and communities of working-class people are devastated. Be it in regard to tackling the problem of land reform, issues of national development, or contributions on the world stage – there is much for communists everywhere to learn from.

China like the U.S. has many nationalities. China fosters equality and mutual respect among its different nationalities, and the leaders of the CPC have adopted many positive measures, such as supporting the liberation of Tibetans from serfdom. Compare that with Washington’s dismal human rights record, or with the oppression visited upon the African American people, who face systematic inequality which is enforced by police terror. That is why a major uprising rocked the U.S. following the murder of George Floyd. The people of the U.S. have had enough of racist discrimination and the anger is growing. Monopoly capitalism never solves problems, it causes them.

Even before taking nationwide political power in 1949, the CPC had made big contributions to the world revolutionary process. By undertaking the national united front against Japan, China along with the Soviet Union made big contributions to the defeat of the fascist powers. The CPC also developed Marxist–Leninist thinking on the problems of national liberation, party building, the need for the people to have their own armed forces, and the necessity of uniting all who can by united in a broad united front for liberation.

Evaluating the process that led to the creation of the Communist Party and the important role the Party has played, Xi Jinping correctly told the 9th CPC National Congress:

“A hundred years ago, the salvoes of the October Revolution brought Marxism-Leninism to China. In the scientific truth of Marxism-Leninism, Chinese progressives saw a solution to China’s problems. With the advent of modern times, Chinese society became embroiled in intense upheavals; this was a time of fierce struggle as the Chinese people resisted feudal rule and foreign aggression. It was in the midst of this, in 1921, as Marxism-Leninism was integrated with the Chinese workers’ movement, that the Communist Party of China was born. From that moment on, the Chinese people have had in the Party a backbone for their pursuit of national independence and liberation, of a stronger and more prosperous country, and of their own happiness; and the mindset of the Chinese people has changed, from passivity to taking the initiative.”

It cannot be said that the CPC has never made any mistakes because that would be a departure from the facts. That said, the CPC has long advanced the idea that, “practice is the sole criterion of truth,” which has allowed Chinese communists to address problems in a timely way, and that by far and away is the main thing.

Every person and every political party sometimes make errors. How could it be otherwise? The point however is to be good at summing up one’s practice and have clear criteria to distinguish right from wrong. For example, in the mid to late 1980’s some forces emerged in China that were antagonistic to socialism. With Western backing, they opposed the socialist road and said the “moon shined brighter in the West.” In the end the CPC was able to address these problems, overcome the challenges posed by destructive forces, maintain the leading role of the party in society, and continue on the road of socialist development.

All this contrasts favorably with the setbacks that impacted some of the socialist countries. Starting in the late 1950’s, the leaders of the USSR departed from Marxism–Leninism, then caused splits in the world communist movement, and allowed corruption to divorce the leaders of the Communist Party of the Soviet Union (CPSU) from the working people. This same process was reproduced in the socialist counties of Eastern Europe. In the end, socialism was destroyed from within by hostile class forces – with the willing assistance of Western imperial powers. The peoples of the USSR and Europe found out through their own bitter experience what happens when capitalism wins out. The result was hunger, degradation, and wars. The accomplishments won by the heroic contributions of the working class and peasantry vanished in an onslaught of reaction. In what was the USSR, millions wish for socialism’s return.

This experience should stand as reminder to communists everywhere of understanding the great value of what we have, that the socialist counties should be treasured, and clarity about the differences between capitalism and socialism as well as between correct and incorrect, right and wrong.

In the U.S. there are quite a few leftists who reject dialectical and historical materialism, and instead have adopted the standpoint of subjective idealism. They take the view that if a socialist country is not exactly the way they want it to be – then it is not socialist. This is wrong and contrary to reality.

China and the world

The world is a better place for the existence of People’s China and the CPC. The victory of the Chinese revolution transformed the world. At one stroke, a fourth of humanity was liberated from the yoke of imperialism, took the socialist road, and began the journey to a society without classes: communism. This development alone changed the balance of world forces and weakened the position of the imperialist powers in a big way.

In 1949, the world was a different place. Much of the globe was under the rule of colonial powers who dominated the lives of hundreds of millions of people in Asia, Africa, Latin America, and the Middle East. The Chinese revolution gave tremendous energy to the fight to end colonialism and neo-colonialism. It paved the path for the victory in Vietnam, Cuba and many other places. People everywhere want to be free to determine their own destiny. The example, and at times material assistance of China, was a major factor in the fight for independence and national liberation.

Today the continued existence of the Peoples Republic of China, as well as the other socialist counties are an important factor in the world communist movement and brighten the prospects for socialism on a world scale. It is a good thing that there is an alternative to imperialism.

Here in the U.S., all the contradictions in society are sharpening as the decline of imperialism picks up speed. Each day more people are looking to socialism as a potential solution to our problems.

Quite a few leaders of Freedom Road Socialist Organization have traveled to China, some many decades ago, and we look forward to building a closer relationship with the CPC. Marxism–Leninism has done great things for the people of China. It will do the same for the American people. Together, the peoples of the world can accomplish great things.

While China and the CPC have worked tirelessly for world peace, the same cannot be said of the rulers of the U.S. Wall Street and the Pentagon say that China is a strategic competitor, and they speak of war. This is something that we will always oppose. FRSO fully understands that socialist China wants peace, and we oppose each and every act of our government that is harmful to that end.

The people of the U.S., China, and indeed the entire world have a shared destiny. What happens to one of us, impacts all of us. We can stand together for a socialist tomorrow. It is a day that is sure to come. 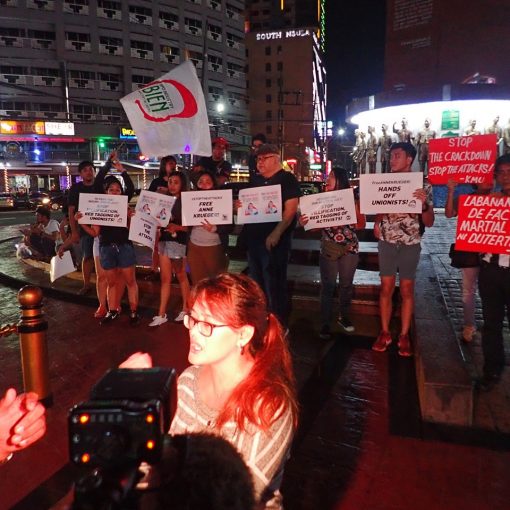 By Freedom Road Socialist Organization On May 1, International Workers Day, millions upon millions will be marching against the capitalist economic crisis […]