“Modern bourgeois society,” wrote Karl Marx and Frederick Engels in the Communist Manifesto, “with its relations of production, of exchange and of property, a society that has conjured up such gigantic means of production and of exchange, is like the sorcerer who is no longer able to control the powers of the nether world whom he has called up by his spells.”

Marx and Engels, the founders of the modern communist movement, wrote those prophetic words in 1848, on the eve a great wave of social revolution that changed the face of Europe. Today, 160 years later, we are witnessing the deepest crisis since the Great Depression in the 1930s. The words of the Manifesto ring out just as true as ever and the scientific principles of Marxism-Leninism are affirmed.

The basic contradiction of capitalism is between private, capitalist accumulation and the social character of production. Millions of people work under a complex division of labor in order to produce goods and services, while a tiny group makes enormous profits from it. This leads to periodic crisis of overproduction where unsold goods pile up while the capitalists slash production and lay off workers.

For the last 25 years the capitalists have tried to limit the scope of these crisis through expanding credit and financial speculation. But these efforts only led to the even greater crisis that we see today. We have witnessed gigantic banks collapse under the impact of the of the bursting credit bubble. This bubble has created the illusion of prosperity when the underlying reality has been deregulation, privatization, de-unionization and falling wages for the past 25 years. All the while, wealth has been concentrated into fewer and fewer hands. This new crisis is being compared to the Great Depression and it is global in scope.

We have witnessed an $850 billion dollar rip-off on the part of the ruling class to bail out some of these failing financial institutions. At the same time, working people are losing their homes, finding it necessary to look for additional work and finding it more and more difficult to pay for such everyday basics as food and fuel. This is what the Communist Manifesto means in saying that capitalism creates its own gravediggers. Tremendous effort on the part of oppressed nationality and working class people to fight back is becoming more and more necessary, as the rich threaten our jobs, our benefits and our social services. We must also fight against the continuing wars in Iraq and Afghanistan, and guard against the possibility of new wars against Iran and Pakistan.

Basically, the main point of the Communist Manifesto is that society changes through class struggle. As Mao Zedong, the leader of the Chinese revolution, once said: “Everything reactionary is the same; if you don’t hit it, it won’t fall.” All progressive people must understand this. Capitalism, this rotten system of worldwide mass-robbery, will not collapse by itself. In the trade unions, in the oppressed nationality communities, in the anti-war and student movements, we must get more organized and prepare for more struggles. 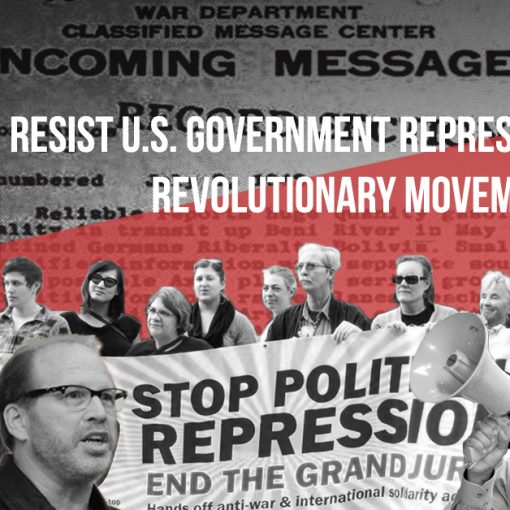 Across the country the U.S. government is unleashing a wave of repression attempting to criminalize those who protest against police killings of […]

Statement by Freedom Road Socialist Organization    March 2003 The Bush Administration has launched an illegal, murderous attack on the people of Iraq. […]