In industry after industry, manufacturing or service sector, greedy employers have a common agenda for unionized workers. They are going after our wages and working conditions; they want to gut our health care plans and pensions; they want more from workers while giving us less – in a word, they want concessions.

Nearly every major airline corporation has gotten, or is trying to get, out of their existing union contracts. Government, particularly at the state and local levels, is demanding wage freezes and givebacks. The steel corporations are refusing to meet their obligations to retired workers.

The backdrop to this accelerating war on working people is the prolonged period of economic decline and stagnation. U.S. capitalism is stuck in a protracted crisis of overproduction – the capacity exists to produce far more goods and services than the corporations can profitably market. The result is more layoffs and endless economic restructuring, where the leanest and meanest corporations emerge as the winners.

And the leanest and meanest in corporate America want more. So they come to our unions demanding concessions. They point to some other corporation in their industry, at home or abroad, that pays lower wages or has fewer benefits, and then say they cannot compete if the proposed concessions are not accepted. The result of going along with these concessions is self evident – a downward spiral, pitting worker against worker in a race to the bottom. And the corperate bosses laugh all the way to the bank.

These are challenging times. The government promises us a ‘war with out end.’ Unemployment is going up. An ongoing economic crisis is falling hardest on oppressed nationality workers: African Americans, Chicanos and Latinos, Asians and Pacific Islanders.

It is vital that the most active, militant and foresighted in the labor movement come together and build a movement that rejects concessions. The heads of corporations are not worried about our fate. Many of us are just getting by, and now these fat cats come along and say we should make do with less. We cannot afford a mindset that puts the profits of the companies we work for ahead of our familes and our selves. The truth is, the rich have plenty of cash and resources. If times are bad, and the economy is down, let them pay for the crisis. We can’t afford to.

Unfortunately, more than a few union leaders have bought in to the approach that puts the corporations’ interests ahead of everything else. These bureaucrats tell us we need to accept these concessions. They tell us that we need to care more about the owning class that we do about ourselves. Why should we care about a group of parasites, which lives off our hard work?

We need to put our unions on a class struggle basis. We need unions of, for and by the workers, that take up the fight against the discrimination and stand for equality. We need to put an end to the situation where many of the unions are little more than businesses run for the benefit of bureaucrats. We need unions that will fight.

In the face of an avalanche of demands for givebacks, takeaways and concessions, activists and organizers in the labor movement need to take a hard line. We should insist our unions do likewise. In the process of doing so, those of us who have a common view of beating back concessions need to be communicating with each other and building organization – inside and outside the existing union structures – that stands for real resistance to employer demands.

by staff | May 10, 1999 Minneapolis, MN – More than fifty poor and working people came together to celebrate May Day, […] 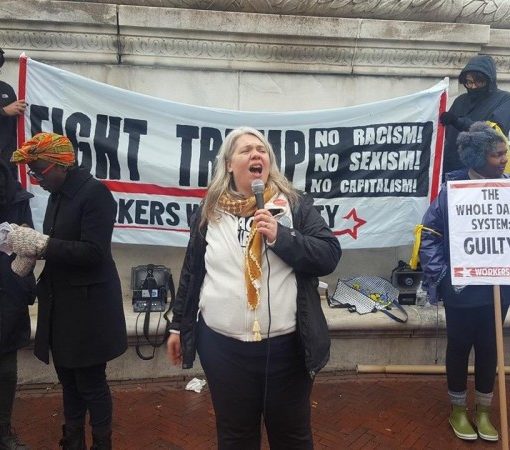 The New Red Trend–“Left” in appearance, Rightist in reality– decide to boldly lie about the FRSO events as they happened, and the results. The FRSO moves forward with Districts in New York, Los Angeles, Chicago, and Minneapolis, plus members in six other places. The FRSO continues to publish in English and Spanish the activist newspaper Fight Back!/¡Lucha y Resiste! Thousands read it during work, at church, inside the corner store, on campus, and in the welfare lines.