The Freedom Road Socialist Organization condemns the repression of the people’s movement that occurred in Denver, Colorado on September 17. Six organizers were arrested at their homes, in parking lots, and while driving. All six were active leaders in protests calling for justice for Elijah McClain and other victims of police brutality. Four of those arrested are members of the Party for Socialism and Liberation, and all are facing trumped-up charges including inciting a riot, kidnapping and theft. These charges are absolutely bogus and are obviously designed to try to crush dissent and silence the movement against police crimes in Denver. We stand in unwavering solidarity with these activists and salute their hard work in building this movement.

This attack on activists in Colorado is just another example of the expanding state repression against our movements, no doubt coordinated at the very top by Trump and the U.S. Attorney General. From the rhetoric of ‘Antifa thugs burning cities,’ to the use of chemical weapons against protesters and the mobilization of far-right militias to maim and kill protesters, it’s obvious that the current administration and its supporters are at war with the Black lives movement currently sweeping the country.

We see this wave of repression building up across the country from Portland, Oregon to Kenosha, Wisconsin, to Tallahassee, Florida. It continues a long history of state repression against leftists and other progressive forces in the United States.

We in Freedom Road Socialist Organization are no stranger to this repression. On September 24, 2010, 23 anti-war activists, including members of FRSO, were raided and subpoenaed in a coordinated attack by the FBI, on bogus charges of ‘material support for terrorism.’ Facing down many decades in prison, we were ultimately able to beat back the attack through mass mobilization and popular support.

It is in this spirit of resistance and solidarity that we stand with the protesters facing repression in Denver, and pledge to mobilize and assist to free those imprisoned and get their charges dropped, and beat back this vicious attack. Though the ruling class may try, there is no amount of repression that can defeat a mass movement demanding justice!

By Freedom Road Socialist Organization March 8, International Women’s Day, is a day that is all about the struggle for equality, justice […] 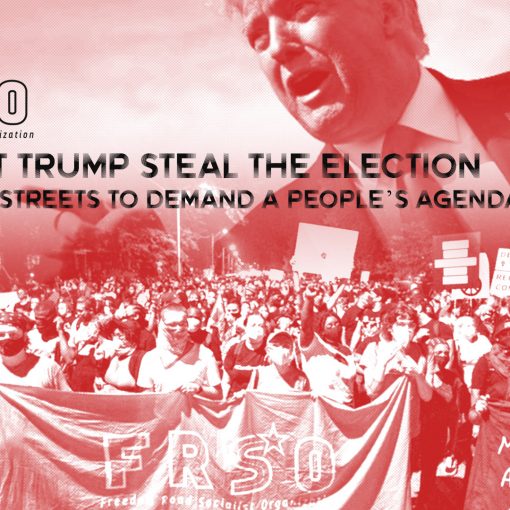