To: Communist Party of the Philippines

The leadership and members of Freedom Road Socialist Organization send our warm and militant greetings to the Communist Party of the Philippines on the occasion of the of your 53rd anniversary and we wish the CPP every success in developing the people’s democratic revolution.

Working and oppressed people around the world, including here in the U.S., take inspiration from heroic struggle of the people of the Philippines and the great advances made by the CPP. Your party has grown from a relatively small organization of proletarian revolutionaries into a powerful nationwide political force which is leading an armed struggle that aims to end the semi-colonial and semi-feudal social system. We are confident that you will defeat the U.S. imperialists, the big bourgeois compradors, and the class of big landlords. We are proud to stand in solidarity with your efforts to achieve national and social liberation.

This past year we joined with you in mourning the cowardly murder of New People’s Army spokesman Ka Oris, and we restate our view that his passing is a loss for revolutionaries everywhere. We have the greatest respect for the courage, sprit of sacrifice, and the will to win that the CPP has shown again and again.

We reject the absurd claims made by the Duterte regime and its U.S. backers that the CPP is somehow “terrorist,” and we oppose the “red tagging” of Filipino activists, which in being utilized in efforts to repress the national democratic movement. We condemn attempts by the U.S. government to use the “material support for terrorism” laws to criminalize the struggle of the people of the Philippines.

The people of the Philippines and the American people share a common enemy – monopoly capitalists who are at the apex of the U.S. empire. The growing struggle in our respective countries helps to create favorable conditions for all of us to move forward.

We place a high value on our militant friendship with the CPP and look to build upon it in the years ahead. The decline of U.S. imperialism is accelerating. Together we will win! 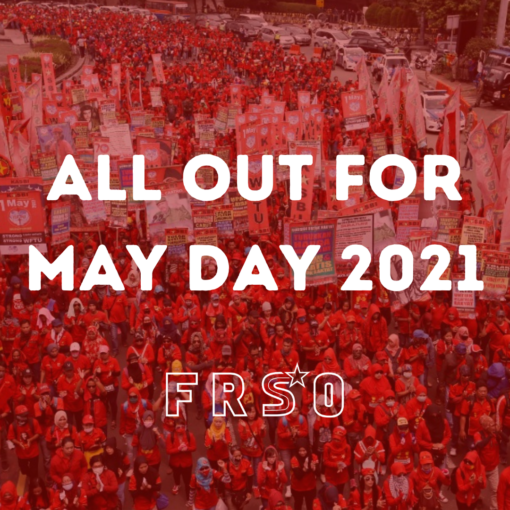 Freedom Road Socialist Organization is calling comrades, allies and activists everywhere to mobilize for May Day this year. With good outreach, planning […]

By Freedom Road Socialist Organization We are saddened by the death of Manuel Marulanda, commander in chief of the Revolutionary Armed Forces […]

Jess Sundin is a leading member of Freedom Road Socialist Organization. She traveled to Iraq in 1998 and has played a important […]