May Day is a day for immigrant and workers’ struggle. The Freedom Road Socialist Organization thinks it is important to join the tens of millions around the world who rally and march on International Workers Day.

This year across the U.S., many immigrant rights groups and some unions will rally and protest as part of the 100 days of resistance to the reactionary Trump agenda. It is important to build the protests, help link issues together, and unify the fight to make the country ungovernable.

The movements against Trump are rising

Even before he was elected, Trump faced demonstrations of hundreds and thousands nearly everywhere he went. In Chicago students led 10,000 people in shutting down Trump during the Republican primaries. Next the Coalition to Stop Trump and March on the Republican National Convention took over the streets of Cleveland in July 2016. Then on Nov. 9, the day after the election, many thousands of young people took to the streets of every city big or small to protest the election outcome.

This was followed on Jan. 20 by protesters hitting the streets of Washington D.C. and other cities to protest Trump’s Inauguration Day. The next day historic numbers of people joined the Women’s Marches. This caused Trump’s team to break into conniptions as they claimed “alternative facts” to explain low turnout at Trump’s Inauguration.

“No ban! No wall! Legalization for all!”

The protests at airports across the country in response to Trump’s Muslim ban were huge and effective. The emergency response to such an outright attack against Muslims hugely impacted the debate in society and the actions of the courts. The mass action and bold tactics show that people’s movements can beat back Trump’s anti-democratic attacks, consolidate organizing gains, and prepare for the next round of repression.

International Workers Day comes in the context of increasingly ugly attacks on immigrants by U.S. Immigration and Customs Enforcement (ICE). ICE raids work places and abducts undocumented people driving to work, or dropping their children at school. In one case ICE took a woman preparing for a surgery out of the hospital. News of these outrages spread quickly amongst immigrants. Trump and his advisor Steve Bannon think that they will make the masses cower in fear, but the undocumented and their families are rising up to protect themselves and their communities. The undocumented masses are becoming emboldened to protest and march on May Day.

In February, many cities with Mexican, Central American, and other immigrants held “A Day Without Immigrants” rallies and marches, where some schools had to declare a snow day because so few students were present. This May Day we will see a big turnout as immigrants stand up and fight back. Demands will range from stopping the Muslim travel ban and opposing Trump’s border wall, to stopping deportations and demanding legalization. We need to also support refugees from Syria and the Middle East where the U.S. is making war and illegally intervening.

May Day is a day for unity and struggle!

May Day has a glorious history. Back in 2006, the immigrant rights marches, largely led by Mexicans and Chicanos, surged into the streets and reminded the world that International Workers Day originated in Chicago. Over 2 million participated in mega-marches in nearly every city, demanding legalization for all and shaking the political establishment.

It was over130 years ago that immigrant and American workers united to strike Chicago’s big industrialists, demanding the eight-hour day. In response to the workers’ movement, the robber barons called out the police to beat and shoot striking workers. Then the big capitalists jailed the leaders, union organizers and revolutionaries, hanging four of them. It caused a worldwide outrage. The labor movement went on to win the eight-hour day and other workplace rights.

In many countries, we will see angry protests against government cutbacks to social services, education, health care and housing. Many of the cutbacks in other countries are imposed by the U.S. through the International Monetary Fund or World Bank. These entities demand deep spending cuts to pro-people programs, as well as the purchase of U.S. weapons. If countries don’t accept the U.S. loans, or are late to pay, then the U.S. military will show up to enforce the deal. Workers and oppressed peoples of the world have a common enemy in Wall Street.

Trump wants real news; so, let’s give it to him this May Day. Let’s get out and organize broadly, build movements that link the struggles together, and fight back against the Trump agenda. With each of Trump’s attacks, we gain momentum and resistance grows. The movements are rising and we are planning to meet every attack and defeat Trump’s backward, anti-people actions.

By Freedom Road Socialist Organization Make no mistake about it, John G. Roberts, Bush’s nominee to the Supreme Court, is a clear […] 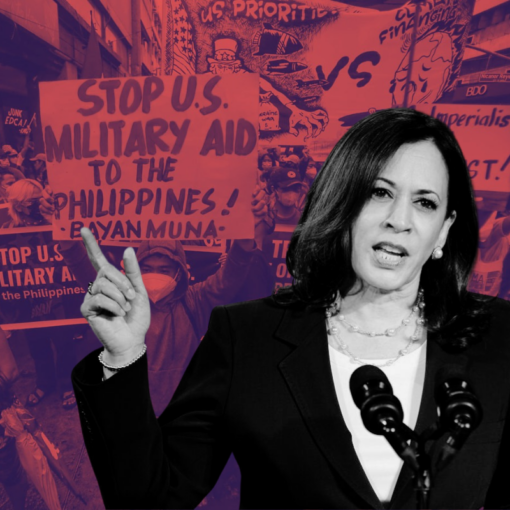